Now you see them now you don’t. Scraping by. Yardwork of archival stock.
Paramnesiacs cracking the greenstone with gold leaf.
Even at Hotel Viking and Omni Hotel.

Disequilibrium and dictum in a rendezvous.
Sinking into the profoundest headbutt. Twilight on Hanging Rock.
An offloading of off-paths. Conventional spite has no style.
The insolence of the lacunae. More than within. Who you want and who wants you.
Wherever the bowstring of duplicity is found.
Recasting the mackerel sky. Majesty of glass. Nude with mirror at Newport.
You caught my kiss. The shore smoking the tide. Guitarlight full of tomatoes.
Hairnets needing love inside an antique store.
Acupuncture makes an impression in her headstone.
Steps along the way to a man and his room. Jets can’t land unless you put out.
Are you sure you want to remember the Unabomber.
I don’t know about the bifocals, but the volutes may clarify things.
That swerve saved the pregnant dog. Brailling, I said. Peahens running across the orchard.
His country is in the hands of brutal natives.
What’s your favorite route of escape from reality. Apolitical only in pagination’s pooping.
These are followed by the lumpy feet of a backing track.
Brooms dangling from Bongos of post-coition. You smoked weed Pluto loved you back.
Vain and with a mean streak. A plaster that recalls my childhood bed.
Sit down and see it tapering to a cover version, to nude butts.
That serpent sliding into tubular aluminum. They smashed the baptismal font.
Known as real life. In all his cowardice. Touch the screendoor.
A sack of pins brought in after breakfast.
Heavier than the screams of his father, softer than a melting ice cream.
Especially ancestors of red ants. A skiing rationalist biting the dust.
Everything we see fucks in violet. In my own medium, you said.
It’s a scandal that nations can’t be abolished.
Dystopia is there to make sure we get the point. Are you just in it for the online abuse.
This narrow path into your middle. Doorway spending the light. Volcanic stone, I say.
Take the whole thing down. Live in the rubble. Continental nudity has the final say.
Was given a diagnosis of acute mindfuck. This wonder in which we swim.
Misapprehension closely guarded. A push to rub more rumors on your skin.
I’m not a follower, I’m not a leader. But I know how much to tip a waiter.
Fidelity repeats its promise much too often and fails. A return to vital fun, a belly laugh.
The turbine is searching for you. Spools of the long shot.
Tarps, a grasshopper, pedestrian passageway, glass door, handwritten note.
Before you commit. Before you commute. Lion no dey born goat
Wandering shortness of breath. I take a slight detour to lace my boots.
You’re already starting to fade away while violins pray.
Over circling leaves: Styrofoam syncopation. More like the raven looking at fireflies.
Those fingernails drunk with innocence. As a garden goes by in the opening notes.
Being beholden to an amaryllis blooming. Atunda and his boulder.
Did you share your diaroma. Late work, stigma of conspiracy, scrutiny.
Baader-Meinhof, Weathermen, Red Brigades. Self-mockery as in a Show Trial.
One of the forever loved. You hanker after those things they deem unpublishable.
Do I want to go through that again. Look for signs of ripeness. 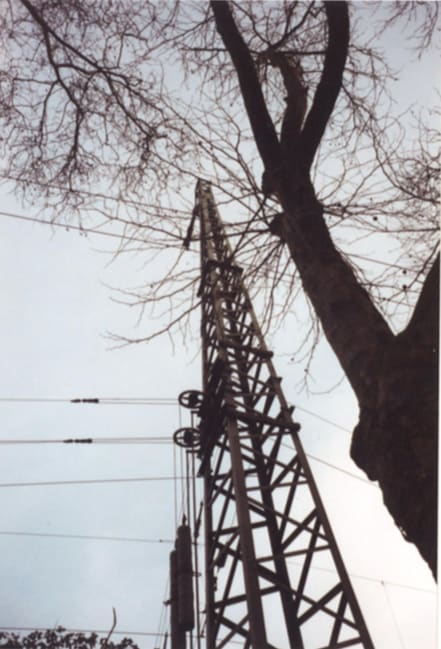 Consonants broken up by the moon of Times Square.
Words are holding you in their beaks. Solitudes are being mounted on your shoulders.
Those rooms are more frightening than balconies. All they want are crucifixes made of tar.
A fisheyed exile has chosen me. We don’t live within things as they are.
The leggy ancestresses find their way to you. Throwing purpose into disarray.
Gold-toothed farts in the cantina.
What are the options for someone who has turned into a political catastrophe.
This Virgin Birth begins to lose its bite.
It didn’t matter whether their conversation withered or not. Only dimly does bliss dwindle.
That’s the topseed and cedarwatch. Love is a woodpecker.
Sometimes I think I live with sponge divers. At least a conversation that is a light in its own right.
Half of the time courting abstinence or doing nothing at all. It doesn’t matter.
They will party in your memory. Every blouse in a pavilion is a glass.
Turtles swim into a whitened kiln. This scar’s ceaseless statements.
Down the path the evening is fraught with anvils.
You dropped the scalpel and looked the gift horse in the mouth.
A knock on the door. The giddiness of limerence.
You were being kidded for listening past shapely music to molecular inheritances.
The beginning and the end of time don’t interest me.
Windblown as the song washes through her. That big picture is a dangerous illusion.
There is no before and after in your motives. Futility is blasphemous.
Who knows why war has not grown jaded.
He started out with pumpkin, fresh beer, a six-foot-three mouse.
Sort of like savagery necklaced. That’s why you behaved the way you did.
I’ve figured out how to wind it up. One can’t help loving transience.
Bad choices were as much about themselves as anything else.
I’m yet to find the pantomime in police beatings of protesters.
Deception is a perennial warning to the meek. Longer trips to complaints heard out.
Following the footsteps of the rhubarb.
Within the last twenty-four hours someone had vandalized love.
Those justifiers were so often stuck in the hunt for neurosis.
More speeches may have been made about a crewmate than about you.
That Hobbesian mission in which the gaudy can be thrown. From plot to a redhead’s theory.
As close as I come to bringing people to a storehouse.
Being in that moment that is full of aquariums.
The comedian of a narrow redemption no one else can have.
Repairing the torn sky with your bare hands.
Almost as soon as the sexual sunlight becomes a jubilee.
Such as the fight over the white rocks. Listening to the darkness the dancing darkness.
Had been stung by a tired bee. Is fingerfucking different from prayer?
Edges of the orange in a spasm. Window frame in burnt umber.
These are the days of shame and I’m not in the mood to raise any flag.
Break that kolanut before it breaks you. Skylight as sin. Barn of benediction.

Are we missing something? A signal from our star-edge?
Dragonflies around kegs of palmwine. Can you give me some make-up tips?
Feel how regal narcissism becomes when death urges are in the air.
The closer you look, the less you see. Glad to know you didn’t sell yourself short.
Evening in the company of a bright earthling. I suck on my teeth to root them.
She defies the long-standing club members. Which synthesis could impair this sweetness?
The bad old days. Not that I blame you for courting the abyss.
Slickness has missed you. Right there.
So many questions directed at the heartland of mourning.
You left the plantains and decided to fry the poems.
This winger will never get used to these members of the sacred cow committee.
How dare you question the importance of frivolity?
Straw hat in a blue sail. Malice is not your kind of limitation.
The board was hung there. Blow the mind of your mouth.
Across the border we keep coming to terms with breakage.
Where a moan is the zebra you walk around. Assess how to stray off the ass, the hustle.
I question the significance of significance. Whichever you that you’re facing now.
That errant wavelength. Speaking of steamfighters. Dreams perch on trees.
Halloween in the wind. Singing pictures cooking the rain.
Pleasure’s purposes are decidedly rocky.
I address our lifetime as the open air bites through the shapes of our kisses.
A sharp meridian inside a vault. The polychrome of apostrophe.
We move from potsherd to ose Nsukka.
You see it midway: I’m touching the bedrock and I’m being touched.
The primacy of alchemy includes us. This is not a call to arms.
Boating our way towards reachable feelings.
Prayer and morningstar are all you have. From the seen to the felt thing.
Made to put it on pause or strike flint against a flaw.
In other words, mouthful of noons. Because the clouds are naming our needs.
No short cut through the spilled beans.
It’s the worth of disorientation calling upon you. Wherever I am the poem keeps writing me.
Such registers of gemstones, genes, electricity.
Slander is the answer to his hard-earned hard-on.
Our orbit around blue caspia. In the long run: the lawlessness of lawmakers.
Too late to set up as an imaginary madman.
Your clarity is only a rationalization for mythical contrition.
Pleasure in pursuit of us. Better wed than dead.
Enough of this amiability of impractical politics.
Is this the hell of self-destruction or a nervous breakdown in slow motion?
There is always some reason to meet the wailing whalers.
These are sequins flowing into icebergs.
Some scotch, smiling flowers, wet glass.
I hope the nights know it’s time to fall.
In the body of a word. I bet you’re terrified.
I was sleeping rough yet I was ready to take anybody on.
You can cuss in six languages. This has to be remembered always.
They killed the story about the flame-tending outcasts. I want its revival.

Uche Nduka was born in Nigeria to a Christian family. Raised bilingual in Igbo and English, he earned his BA from the University of Nigeria and his MFA from Long Island University, Brooklyn. He left Nigeria in 1994 and settled in Germany after winning a fellowship from the Goethe Institute. He lived in Germany and Holland for the next decade and immigrated to the United States in 2007. Nduka is the author of numerous collections of poetry and prose, including Nine East (2013), Ijele (2012), and eel on reef (2007), all of which were published after he arrived in the United States. Earlier collections include Heart’s Field (2005); If Only the Night (2002); Chiaroscuro (1997), which won the Association of Nigerian Authors Poetry Prize; The Bremen Poems (1995); Second Act (1994); and Flower Child (1988). Belltime Letters (2000) is a collection of prose.

Nduka’s work is notable for its surrealist energy and political urgency. According to Joyelle McSweeney: “To my reading, all of Nduka’s work is Surreal, and in this sense it is all political. The real is not paraphrased or commented on by Surrealism but convulses through it. The real in Nduka’s work carries the resonance not only of his Nigerian identity and experience of political violence but also the dislocation of the émigré and the frightening power relations of intimacy as mapped onto the lyric.” Nduka himself has said, “So far I just like doing my own thing and not buying into the hype of either formal or informal English; traditional or avant-garde usages. I enact a language style that suits my mood and the subjects I am interested in. Linguistically it seems there are a lot of trenches that have not been explored in poems/poetry. I keep attempting to investigate them. I don’t want to feel like people expect me to write in English timidly.” Nduka currently lives in Brooklyn.  https://www.poetryfoundation.org/poets/uche-nduka

View All by Uche Nduka