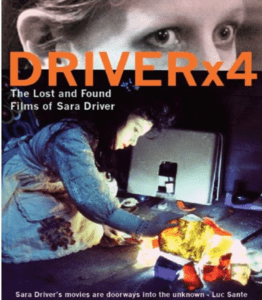 Driver X4: The Lost and Found Films of Sara Driver

Sarah Driver’s films are feverishly haunted by the ghosts of a pre-Giuliani New York City. Her work consists of four: You Are Not I (1981, short) Sleepwalk (1986) When Pigs Fly (1993) and The Bowery-Spring (1994, short). She wrote and directed several plays, produced Permanent Vacation and Stranger Than Paradise with her longtime partner Jim Jarmusch, and coined the phrase “necrotourism” post 9/11. With Jarmush behind the lens, and Nan Goldin as set photographer, this small yet cohesive body of work deserves recognition.

Based on a short story by Paul Bowles, You are not I was named one of the best films of 1981 by the Cahiers du Cinema. Shortly after, the film burned up in a fire and was lost, until, in a Passion of Joan– style recovery, was discovered amongst Bowles belongings in Tangiers and screened for the first time in over 20 years in 2010. You Are Not I follows Ethyl, (Susan Fletcher) an escaped schizophrenic, as she stumbles upon the aftermath of a terrible accident. With the coupling of Fletcher’s starched-white dress and the grainy black and white film, You Are Not I is unsettling and immersive. Ethyl opens the mouths of the dead, who have been lined up neatly on a slope of hill, and meticulously places stones in their mouths, leaving their heads uncovered and mouths agape. She rides in the back of a car alongside another tortured victim, her silhouette strangled in backlight, counting antiquated roadside service stations and tallying them in a journal. Experiencing You Are Not I is akin to waking from an eerie dream you can’t quite remember, but that’s potent enough to loiter in your psyche. The film is absent of score, aside from Fletcher’s buttery, sedated voice. In close up, her blackened eyes mesmerize; uninhibited, and her jumbled mind suddenly make sense as she sees things backwards, forwards, and upside down. In some ways like Theodore Dreyer’s Joan, You Are Not I arrives at catharsis with little action and dialogue.

It’s the year of the dog in Sleepwalker, and Nicole (Fletcher), a print shop worker, takes a job from a peculiar man named Dr. Goo translating an ancient Chinese script. As she does, her life emulates the story, and wackiness unfolds. Her roommate’s hair falls out, and she is visited by a woman dressed in red named Echo who warns her of what’s coming. Elements of fantasy and magic realism drive the story, but Sleepwalker transcends genre. Driver’s visuals drive the plot, colors and framing revealing far more than actions. Fletcher is an ideal vessel; her monosyllabic voice and under-reaction to the increasingly strange circumstances keep the film in balance. Perhaps Driver’s characters appear one-dimensional, but with intention, as they function as paradigms to synthesize the environments she shapes. A scene in the printing shop shifts into an experimental jazz piece, as the office’s many apparatui click into rhythm, and a fresh faced Steve Buschemi squints at negatives over a flickering light table. A saturated gaggle of multicolored rotary phones ring in unison while vintage computers delight. Nicole rides the elevator down and the doors open on every floor, each mise-en-scene odder than the last. As she descends further she meditates on the sky out of the top of the rusty freight elevator, looking up hundreds of feet as the angles of the building connect in the distance and a smudge sunlight curls into the corner of the frame. The unity of enchanting scenarios and stunning cinematography in Sleepwalker result in an offbeat, original work.

Dedicated to “The ghosts who walk with us”, and inspired by Topper, When Pigs Fly is perhaps Driver’s most conventional film. Joe Strummer scores Pigs, which is set in an east coast port town (actually Munich) full of Irish pubs and empty fishing yards, captured beautifully by cinematographer Robby Mueller. Marty (Alfred Molina) is a struggling jazz musician living in a mess with his dog, and the opening sequence crosscuts between their dreams as they sleep, full of jazz and cocktails. Frank (Seymour Cassel) is a stingy, ill tempered bar owner where Shelia, Marty’s girlfriend is a go-go dancer. After discovering an old rocking chair in the back shed of the bar, Shelia gives it to Marty for his house, unaware it would come equipped with a pair of ghosts, Lily (Marianne Fathfull) and Ruthy (Rachel Bella). When Pigs Fly is a quiet piece, always a gloomy gray sky, and a Helmut Newton-esque call girl standing on the peak of the town’s bridge, perhaps a local German model?  The characters are sympathetic and genuine, struggling for closure. As Molina walks with his inherited ghosts, he sees the past of his town, his family, and the experience is equally whimsical and grave.

Part of the French series Postcards from New York, The Bowery is a condensed but fascinating glimpse at the old days of The Bowery, with appearances by Luc Sante, June Leaf, Joe Coleman, and Driver herself. A brief history of “the domain of ghosts”, Driver briefly meditates on McGurk’s Suicide Hall, a last-stop for prostitutes who died in large numbers by swallowing carbolic acid, and stops to listen to tales from old sailors in the tattoo shops. Joe Coleman opens the doors to his Odditoruim, which boasts a lock of Charles Manson’s hair, a cancerous liver stretched into a decorative accessory, and a framed letter from notorious cannibal Albert Fitch to the mother of his final victim.

View All by Mary Hanlon