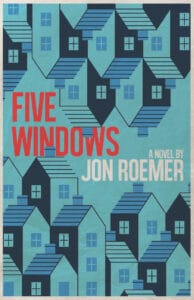 We meet the small press editor/protagonist of Jon Roemer’s new novel Five Windows doing what he does throughout much of the novel, gazing out his window at a lunatic San Francisco skyline parading itself outside. In this case, he sees the first of many fires that will blaze throughout the book.

Early in the novel, the protagonist (I’ll call him J as Roemer chooses not to name him) ventures occasionally out of the house, mostly attending meetings in which concerned neighbors gather at a local library to try to fight the erection of a formidable building complex. The very real San Francisco housing crisis lurks everywhere in the novel, a ghostly sense of a lost city.

But mostly, particularly after getting sidelined by a knee injury, J simply remains at home.

The action comes by way of potential manuscripts arriving through J’s digital queue; phone and video calls; visits; insane goings-on both inside and outside the building.

But what is remarkable about Roemer’s achievement is that despite the absence of action in the conventional sense, his novel is never static. It’s as if he’s created a one-person play that seems Shakespearean in scope, and Hitchcockian in suspense even though the only really dramatic events occur off-stage.

Roemer—with whom I went to graduate school long ago but know mostly in the context of his editorial work for Outpost 19, the small literary press that he founded in 2012—creates a dystopic-seeming universe in which nothing feels entirely real. But when you scratch the surface, you find that it is not some fantastical place but just San Francisco in the grips of wealth and racial inequality, construction, and gentrification. And, yes, there are the oddball characters that will apparently always be endemic to the place. Think an updated but darker Tales of the City.

As the dystopia is actually a reality, the thriller that keeps you on the edge of your seat is  a series of mostly garden-variety experiences: Darrel, another resident of J’s building, getting inexplicably injured; J’s strangely disengaged ex-wife popping in to check in on him then returning to the mysterious house of only women also visible from J’s window.

And, finally, and perhaps most significantly, the tempting but ominous offer from a famous writer to J’s small press of a potentially-bestselling novel that goes hand in hand with some murky, Faustian deal.

And the whole novel is damn funny. From the “Eggsprout” cartons filling up J’s apartment as he convalesces to countless bizarre interactions and dialogue, which can be just a tad Pinteresque.

Looks like you’re feeling better. Have you been sick or something? You haven’t looked well the last times we’ve talked.

A minor injury. It’s nothing. A minor assault. Nothing too bad.

Assault? What are you doing getting assaulted? How does something like that happen? I don’t think that sounds smart.

Well, it’s not smart. And it wasn’t really an assault.

Flawed but sympathetic, J bounces around in a Roemer’s riotous universe. Five Windows is a Russian Doll of confounding contradictions: still but energetic, deadpan but tragic, obscure but utterly engaging. There is really nothing like it.

David Winner is the author of Tyler’s Last and The Cannibal of Guadalajara. His work has appeared in The Village Voice, The Kenyon Review, The Iowa Review, The Millions, and other publications in the US and the UK. He is the fiction editor of the Rome-based magazine, The American, a contributing editor for Statorec.com, and a regular contributor to the The Brooklyn Rail.