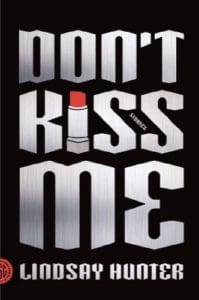 Combative and cautionary, Lindsay Hunter’s most recent short story collection, Don’t Kiss Me, offers readers fierce independence. The sophomore story collection is intent on grossing out and alienating some readers, but strange, unique and charming enough to attract plenty more. At just 175 pages, the collection includes 25 very short stories, most of which are written in colloquial language, oftentimes in the vernacular of a child – immensely honest and unfiltered.

Thematically, the stories address issues like sex, gender, age, loss and loneliness. “My Boyfriend Del” tells the story of a 30-year-old woman who takes on a nine-year-old boy as a boyfriend while “Leta’s Mummy” tells the story of a problematic and ghoulish mummy who lives beneath the floorboards in Leta’s home.

Like the content, the prose is raw. At her best, Hunter’s prose sings with gritty emotion. The following paragraph from “My Boyfriend Del” shows Hunter’s use of vernacular and drama:

“Back at his house he asks if I want to play Princess Leia and I am touched, I know he’d rather have her for a girlfriend than me, It’d be an honor, I tell him, and he hands me my light saber and then knocks it out of my hand with his. You’re dead cinnamon-bun dumb-hair, he says, looking up at me through his bangs, my hand is throbbing from where his light saber hit, again I die for him, I shudder and quake and cry out and fall at his feet and die.”

At times, the collection is perhaps too intent on shocking the reader, too craving of attention.

“We smoke out back, a while ago someone wrote, You so ugly on the seat of the one chair out there, it’s a badge of courage to sit in the ugly chair, the pedicurist declaring me so ugly that I could scare the shit out of poop.”

But with sentences like “Loneliness as nightly death, bed a burial,” from the story “Gerald’s Wife,” Hunter pares away much of the artifice from fiction, exposing the most essential meaning at its core. Bold and often beautiful, Hunter’s Don’t Kiss Me boasts a collection of stories that are both inventive and heart-felt, contemporary and full of genuine feeling in strange and unexpected places.

View All by Todd Petty